Leigh Herrick is an award-winning, Pushcart-nominated poet and writer, as well as a past recipient of a Minnesota State Arts Board grant.  She is also an alumnus of Vermont Studio Center where, in 2001, just after 9/11, she wrote the bulk of her book Home Front.

From Home Front, Herrick created her first album, Just War, underscoring certain poems from the book with music, some of them sung.  Her second CD was a spoken word piece, Monocle Man, also underscored.  Having studied traditional hand drumming with master drummers over a 12-year period, post-college, it was a natural, next-step-up in the development of her work that Herrick began "composing" her poetry with traditional drum rhythms and original compositions.  “I couldn’t help it.  I was just hearing all this stuff in my head, and it wouldn’t let go.”  Herrick also used her guitar training in some of her albums and singles, and she dropped a blues tune in 2014 as a single called, Solitary: Song for Herman Wallace.

Herrick was selected as one of “The Sixty-Four” best poets of 2019 by Black Mountain Press.  As an engaged poet and writer for over 30 years, Herrick’s work has included public performance, readings, and testimony at numerous coffee houses, bars, galleries, and institutions including The Loft, The University of Minnesota, Minneapolis Public Schools, Hamline University, Amazon Bookstore (Minneapolis), A Room of One’s Own Bookstore (Madison, WI), and Innisfree Poetry Bookstore (Boulder, CO).  Her poetry, vispo, collaborations, and photography have most frequently been featured in surrealist and avant-garde publications, many of which are searchable online and on this website.

Herrick also writes fiction and creative non-fiction and her work is decidedly feminist.  Her poetry ranges from traditional forms to the experimental, avant-garde and surreal.  But in the undertones of all her work, Herrick remains dedicated to helping eradicate all things non-egalitarian, and to re-membering Women and Girls who remain subject/s to the imposed limits of personal and political power due to their gender while under a system of patriarchy.

When not writing, Leigh Herrick works the soil and is engaged in restoration planting, gardening, and tending a wide variety of edibles and plants that provide food for pollinators, birds, and small mammals – the range of beings who often join her in the yard, or who are observed from a kitchen window.  Not the least of these beings is Herrick’s latest sidekick, a mini-schnauzer named Gracie.

Donations are accepted.  For those wising to support independent art, find the link at the bottom of this page. 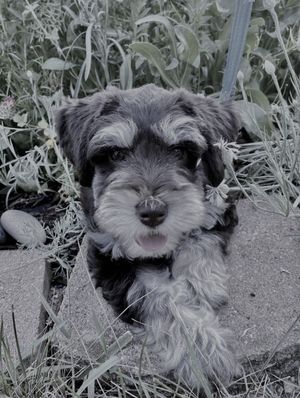